Dealing with the bloody combat between the Austro Hungarian Empire and the newly Entente aligned Italian nation, Italia will show the see saw battles on the fringes of the Alps until, with massive German support, the Central Powers broke the Italian lines at the brutal Battle of Caporetto.

Finally the game will encompass the dramatically successful Italian counter offensives in 1918 which finally, along with internal political strife, broke the back of the Austro Hungarian Empire.

In the box will be maps of Italy and the South Western are of the Austro Hungarian Empire, plus counters covering the forces employed in this exciting theatre.

Watch this space for more on Italia as we prepare the game for pre-production research, supported by our industry leading research team.

Merry Christmas to you all. We will be releasing Balkan Fury and Watchtower to press in the New Year. Unfortunately I have not been 100% well for a while (various things – all on the Read more… 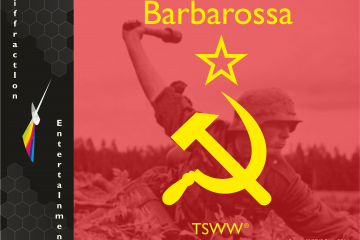 30% off! Barbarossa Colonel’s edition is the must have East Front war game from the TSWW games series.

“Holy sh*t, this box is heavy”. Feedback on Barbarossa by a renowned game reviewer…

The quality is second to none. I can honestly say that this is one of the highest quality games that I have ever seen.

This website uses cookies to improve your experience while you navigate through the website. Out of these, the cookies that are categorized as necessary are stored on your browser as they are essential for the working of basic functionalities of the website. We also use third-party cookies that help us analyze and understand how you use this website. These cookies will be stored in your browser only with your consent. You also have the option to opt-out of these cookies. But opting out of some of these cookies may affect your browsing experience.
Necessary Always Enabled

Performance cookies are used to understand and analyze the key performance indexes of the website which helps in delivering a better user experience for the visitors.

Analytical cookies are used to understand how visitors interact with the website. These cookies help provide information on metrics the number of visitors, bounce rate, traffic source, etc.

Advertisement cookies are used to provide visitors with relevant ads and marketing campaigns. These cookies track visitors across websites and collect information to provide customized ads.

Other uncategorized cookies are those that are being analyzed and have not been classified into a category as yet.